"Fortune Favors the Bold" - why stepping out of your comfort zone is a good idea!

It was a cold and windy Saturday, but instead of snuggling up in my fleece blankets as usual, I jumped into an Uber and headed downtown. I was going to a very special event: the Minnesota Orchestra had come to South Africa! Having nabbed the last available ticket for their Joburg performance, I entered City Hall. I'd never been inside, and it's a grand old building! 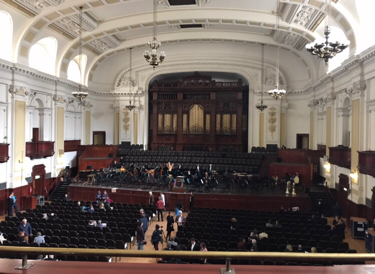 I'm originally from Minnesota, and I knew that our orchestra was something special, but I didn't know what a great and lucky day I would end up having.

The music was amazing!! They played Beethoven's Ode to Joy, which I know, and the huge chorus (100 people, half South Africans and half Americans) sang it with real passion in their hearts. It brought me to tears. They also sang "Shosholoza" and "Mandela," as well as a totally new piece by a South African composer named Bongani Ndodana, who got up to conduct (the rest were done by the Finnish conductor Osmo Vänskä, who was also an energetic treat to watch!). 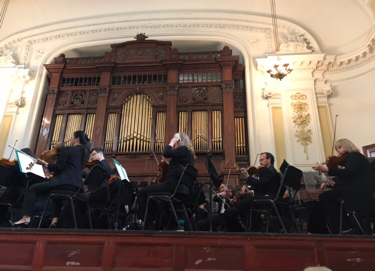 Prior to the show, I had read an article about the country-wide tour,written by a Minnesota Public Radio (our equivalent to the BBC) reporter who was traveling with the orchestra, so when I spotted the dude with the recording equipment, I guessed it was him and went up to greet him. Turns out he's a super nice person, and he interviewed me for the radio! 🙂

During the concert, I sat next to a Minnesotan couple (there were actually 300 Minnesotans in the room because the tour brought all their sponsors with them, plus the musicians, the choir, and some of their children.). Of course they were friendly, and they asked me my name, and what I was doing here. When I returned the question, the woman replied that her name was Linda Mack.

I said, "Linda Mack, the architecture writer for the Minneapolis Star Tribune newspaper? Wow!! I used to read your column all the time!" She was pleased, and when I walked them to their tour bus, I took a moment to point out some buildings in downtown Joburg, since the tour guides weren't going to show them the area because of safety and security issues.

Then the Macks invited me to tea the next day, so I went out to their hotel in Sandton and chatted with them for a couple of hours about (my admittedly limited knowledge of) South African history and culture. It was delightful.

Well, as the saying goes, "fortune favors the bold," and so I'm glad I got out of my comfort zone to go to a new place and hear a new thing.

Hope this helps you to take up new opportunities, try new things, put yourself in new circumstances -- because that's how good luck happens!