Storytime: Plot Twist At The Library or, how "making them right" opens new doors

I got restless while writing at home, so I headed to my local public library, also known as "the original co-working space."

When I sat down at a free table (lucky!) and noticed it was warm enough inside to remove my hat and scarf (lucky!), I realized I had forgotten my earbuds for music (unlucky!).

Your library may be all, "Silence, Please," but as we say here every day with a shrug and a smile, "This is Joburg," so my library was abuzz. People were thronging, in fact. Good to see our public services being so well used!

Children playing in the storybook area, parents reading aloud to their parents, and every minute or so, a new patron striding in through the front door, calling out greetings to the librarians and being hailed in return. So friendly! (And shoot, I should have brought my headphones!!)

Speaking of greetings, however, the worst noisemaker of all was, in fact, The Grumpy Librarian herself.

I promised you a plot twist in the title of this story, so don't get too despondent as I describe Mrs. Grumpy.

She greets library visitors, only to scold them a moment later, "Well, you should have brought your ID, then, shouldn't you?" She speaks in a constant monotone to her colleagues, mostly about things she can't control: "I guess I'll have to do this over again, as our system is so slow. Why won't they upgrade our computers? This place will never change."

And she makes people wrong, which is the hardest to listen to. No matter what people say, she'll correct or contradict it.

A middle-aged visitor greeted the librarian pleasantly and wished her a happy new year, as it was the day of Rosh Hashanah, the Jewish New Year. "I'm not Jewish," replied Mrs. Grumpy. "If I were, would I be at work?"

Wow. How many other options were there, in that response? I could think of three:

But instead, The Grumpy Librarian made the visitor feel dumb and wrong.

The phrase "to make you wrong" means that whatever you say, the listener lets you know right away, with words or a look of scorn, that it sounds bad. It was definitely an impolite, rude, horrible thing to say (even if it was, "Nice weather, eh?").

It's very uncomfortable to be around someone who "makes you wrong" all the time!

So I sat there in the library, without my headphones, and tried to write. Reading was impossible, but at least writing was do-able, for a while.

Then a small boy toddled up to the counter with his book.

I cringed inside. How terribly would The Grumpy Librarian speak to the boy? Would she turn him off libraries forever? Would he never read again?

The Grumpy Librarian sees him.

She asks, "Jason, can I pull the step around so you can see over the counter?" And she does so.

She says, "Jason, would you like to use the date stamp on this scrap piece of paper?" I hear [thump, thump] as he stamps the paper.

And she's calling him by name.

I was sure that Mrs. Grumpy would crush young Jason's spirit beneath a stack of dusty old books. Instead, she lit him up like a Christmas tree. She even complimented him on his book choice: "Oh, a train book! You'll love that one!" He swaggered out of the library like the literary connoisseur that he was.

Now who had been making someone wrong? ME, that's who.

When we have the expectation that things will be exactly the same every time, or perhaps even worse, we are doubting the lavish creativity of the universe.

We are selling ourselves and our futures short.

Who are we to say what WILL happen next?

God is an amazing magician. Sometimes today is wildly, extravagantly different from yesterday. Cosmically, radically distinct. And isn't that marvelous?

I'm going to recommend a youtube video for you here, one I've used myself. It's by Brad Yates, and it's called "Desired Outcomes versus Expected Outcomes." It's short, you just follow along with him for five minutes, but it's effective. Give it a try and let me know how you feel afterwards. 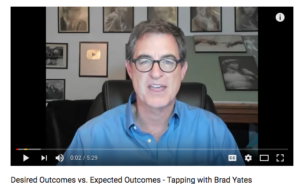 Whether you've had a chance to watch the ^^ video or not, let's talk about making people right.

I don't mean excusing bad behavior. I'm talking about the daily snarkiness that we can fall into too easily. How can we reverse that?

Try saying "Yes" before you say "No," when you're answering a question.

Child: Can I go outside without a jacket?

Mom: (NO! Are you crazy! You'll catch a cold and die!) Yes, go outside, see how cold it is, and come back to get a jacket if you're too chilly. Let's see.

Attempt agreeing before you disagree.

Rider: (Are you mad? I'd rather live in Thailand!!) Winter is cozy, né? What do you love about winter? Oh, really? Yes, I see. But me, I prefer the beach.

Making someone wrong can come from a need to one-up him, to put him down.

Find what you love about the person and start from there. Cooperate.

You: (I'd rather swim in lava. And you are unsophisticated and have no taste.) I love spending time with you, too! Let's play for 30 minutes and then go for a walk to get ice cream.

Making people right, even for an instant, can re-glue a broken relationship. Try it?

When I left the library, I thanked The (Previously Known As Grumpy) Librarian, and she said, "Have a nice day!"