An incomprehensible Torah story and its meaning for us, today

Adina teaches bar/bat mitzvah classes and adult Bible courses, integrating poetry from her background as an English major and Fulbright scholar, Hebrew and Torah textual analysis from her studies here in South Africa and in Israel, plus psychology from her Wits masters degree and her practice as a Jungian psychologist.

For adults, she offers Torah study classes that are different from any I've taken elsewhere (I was raised Catholic, so I was lucky to experience plenty of religious education from kindergarten all the way through university, but nothing like these!).

This time, Adina's course took us through Genesis and ended yesterday with the story of Judah and Tamar. Do you remember it? It's more convoluted than a soap opera!

Judah, a male elder in his community, has three sons.

Clever Tamar, feeling strongly that she must bear a child with genes from Judah's line, disguises herself as a prostitute and seduces Judah himself. 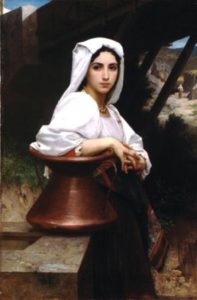 When Judah sleeps with Tamar, he doesn't pay her on the spot but instead leaves his "seal" (like his ID book or driver's license) with her, as a promise to pay her later.

When Judah hears that Tamar was prostituting herself, he is horrified. He orders her to be burned at the stake. She, however, still holds his seal (it has his signature on it, and there's only one of its kind) from their encounter.

She sends a message back saying, "The father of my children is the one who owns this seal."

Judah immediately figures out that it was himself, and his words are, "She is wiser / more righteous than I." And thus her life is spared, and her children are born.

Tamar bears twin boys, one of whom becomes the ancestor of the Messiah.

How unfathomable are God's ways!

Why does God use such means to bring Light to the world?

This was a topic of great debate for us in the class, and it brought me some clarity about my own imperfections, stumbles, and trials.

Our teacher Adina led us to contemplate that "sometimes too much innocence, in a person who is uninitiated in the ways of the world, means he needs to make contact with his flawed humanity."   His sinfulness can crack him open.  His mistakes offer him an opportunity.

Redeeming himself through sin and forgiveness means the person can become truly whole, rather than just innocent, which implies being "naive and pure-without-being-tested."

When in my own life have I made terrible mistakes? Plenty!

If I just kept on sinning, tromping on people's feelings, following my willfulness and refusing to examine my prejudices - life would be hell, even in the here and now.

True recognition of the mistakes as mistakes and humbly choosing a new path forward -- that's the way to fulfill the larger mission.

It seems that the road to Heaven is long and crooked, and it's still a mystery that I don't completely understand.

Adina's teaching on Judah and Tamar, however, has brought me to a new compassion for the times when I've gotten lost.

I've been reminded of the ways to get back on the path: admit, make amends, forgive myself, and see my human errors as part of a larger Divine picture, one that I'll only understand in retrospect.

Always remember, you are guided!